It’s great to live in America, the land of opportunity, where any boy can grow up to be the queen. In the Punch-Out!! series, you play the role of underdog boxer “Little” Mac, a new, up-and-coming fighter set on claiming the championship title. But standing between you and the title is none other than world-renowned boxer and World Heavyweight Champion Mike Tyson! Lend me your ear and I’ll tell you why this game is good.

Mike Tyson’s Punch-Out!! was actually the third game in the Punch-Out series, but only the first one on the console. Punch-Out!! and Super Punch-Out!! were arcade titles released in 1983 and 84, respectively. They did well critically and commercially, but the series didn’t become widely recognized until it was brought to the NES.

There were quite a few things that contributed to the NES game’s success. Part of it was the cartoonish graphical style–even more cartoonish than the arcade games. Little Mac is truly little in the NES version, too, being dwarfed by the massive, looming opponents. The stark difference in size emphasizes his underdog status. 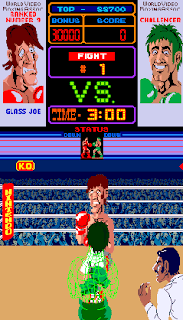 On the left, you see the arcade version, and on the right, the NES version. In the NES version, even against the first opponent Little Mac seems outmatched, hence his name. The arcade version made the (originally unnamed) player-character the same size as his opponents, and made his body a green wireframe to let the player see through him. It doesn’t look very appealing but it gets the job done. The NES version, by making Little Mac much smaller than his opponents, solved the problem of obscuring the opponent’s hands by a different method, and sufficiently intimidated the player. Often you’ll find that technical limitations impel video game creators to come up with a solution that works so well, it’s surprising that it wasn’t planned from the start.

Little Mac is aided by his coach, Doc Louis, who may give him hints if the player is clearly not making any progress in defeating the opponent. There is a very light plot, with cutscenes showing Little Mac training and working his way up the ladder. It helps the player really feel a sense of accomplishment. The “Rocky” movies, starring Sylvester Stallone, were big hits through the 80s and there must have been at least some influence when crafting the feel of this game.

Receiving hints from your trainer is crucial because Punch-Out, despite its sports game trappings, is really a puzzle game. Each opponent has a different weakness that must first be discovered and then exploited. There is a large amount of damage you can dish out by being aggressive and hammering the A button as if this were a fighting game, but after the first couple of opponents it becomes impossible to win without paying attention and using your brain. The game is also forgiving in its progression system. If you lose, you only go down a rank. If you get a game over, you can start from the beginning of the current league.

The roster is filled with colorful characters from around the world. Some of them were changed from the original versions. Vodka Drunkenski, for example, was renamed Soda Popinski to avoid treading on Nintendo’s strict censorship policies (My, how times have changed). Little Mac faces most opponents twice–the second time they have the same weakness, but are much fiercer. Obviously once the player knows the solution to the puzzle, it could get boring if there weren’t an added challenge.

And of course, once you beat the game there are ways to challenge yourself when you replay it. A high score is meaningless nowadays, but you could challenge yourself to get a better and better score each time, or you could time yourself. Simply beating the game is satisfying on its own, but when you dance around opponents and swat them away like flies, you’ll truly feel like a champ. Some players can even play the game blindfolded, although it’s impossible to beat Mike Tyson blindfolded except by chance.

Interestingly, Tyson’s real-life fighting style was incorporated into the game. Tyson was a very quick and aggressive fighter. Mike Tyson fought in 58 bouts compared to Muhammad Ali’s 56, but Tyson only fought 211 rounds whereas Ali fought in 541 rounds. A staggering 41% of Tyson’s fights ended in the first round, and another 12% ended in the second round. Tyson only ever lost six bouts, and five of those losses came after Round 4. Tyson’s power came in the beginning of the match. He didn’t just wish for his opponent to crumble quickly–he needed them to. Likewise, in the game a single punch from Tyson results in an instant KO, if it occurs within the first 90 seconds of the fight. In the game and in real life, you need to wait out Tyson in order to beat him. Interesting!

Here’s a video of me failing.

With the game’s aesthetics, sounds, boxing moves, real-life inspiration, and enticing underdog story, players get to experience all the excitement of classic professional boxing, but without the early-onset Alzheimers!

Anyway, Punch-Out!! has been well-loved for the past 30 years, being remade and followed-up a few times. More recent entries, such as Super Punch-Out!! for the Super Famicom, have visuals that more closely resemble the arcade games but with gameplay that follows the Famicom game. In my opinion, none of them capture the magic of the NES version, but they are definitely great games.

The development of Mike Tyson’s Punch-Out!! is pretty interesting. I recommend watching the video below.

Because Nintendo’s license to use Mike Tyson’s name and likeness expired in 1989, there is no way to buy a digital copy of this version of the game. You can find a cartridge various places online. If you own a copy, you can download a backup rom here and run it with Mesen. The SNES version of Super Punch-Out!! is also available for the Wii U.