Did you ever play with marbles as a child? I did, but one day I lost all my marbles. Anyway, I’m going to show you Marble Madness today, as you no doubt surmised by the title of this article. Atari had a really good year in 1984, pumping out tons of innovative and interesting titles such as Paper Boy; I, Robot; and many others. If only such innovation had come in 1982 or ’83….

END_OF_DOCUMENT_TOKEN_TO_BE_REPLACED

Why do story writers never give terra-forming its due respect? In science fiction especially, the whole process is glossed over, so that you can get right to the action. It couldn’t possibly be as interesting as laser battles, right? Wrong! Let’s take a look at a true forgotten classic after the jump.

END_OF_DOCUMENT_TOKEN_TO_BE_REPLACED

1982 was without a doubt one of the best years in video gaming history. The sheer amount of innovation and variety is stunning. Of course, the glut of low-quality games released in 1982 directly caused the great crash of ’83. So, it was the best of times and the worst of times. But maybe, considering how many games there are on the list below, 1982 ought to be called “the year that almost made it.”

END_OF_DOCUMENT_TOKEN_TO_BE_REPLACED

It’s funny how game consoles and computers carry different connotations with them. Even though consoles are just computers designed for a specific purpose, they carry a different association. Today, consoles are considered more “sociable” whereas PC gaming is often considered suitable for a “lone-wolf.” Multiplayer games on consoles are built with the living room in mind, and up until the seventh generation any game with a multiplayer mode included local multiplayer (i.e., the other players are sitting next to you instead of miles away) by default. In the 1970s and ’80s consoles also carried the connotation of shrinking down arcade cabinets to cartridges. Ever since the days of Home Pong consoles tried their hardest to bring arcade games to households.

END_OF_DOCUMENT_TOKEN_TO_BE_REPLACED

For this year we’ll do a brief overview of the Vectrex console, and take a look at an interesting first entry of a long-running CRPG series.

END_OF_DOCUMENT_TOKEN_TO_BE_REPLACED 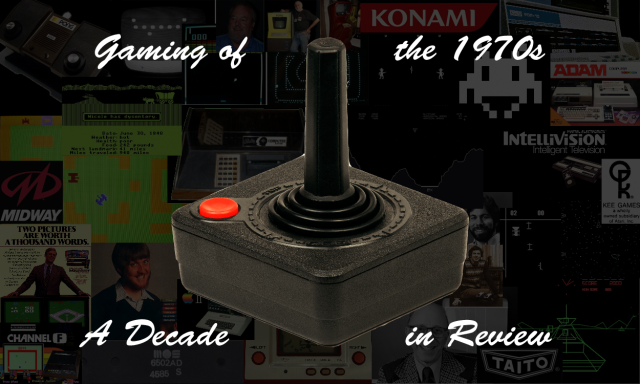 Wow, is it already the end of the decade? It seems like such a short time that I have been covering the games of the 1970s, although a contributing factor may have been me covering only a few games from the whole decade. Well, at any rate we can take a look back now and see what has led us to this point. As we welcome the 1980s let’s appreciate the triumphs and (it is hoped) learn from the failures that came to pass.

END_OF_DOCUMENT_TOKEN_TO_BE_REPLACED

Refinement has always been as central an aspect to video gaming as innovation. As soon as a brilliant idea comes to the medium, it is edited and polished at such a dizzying pace that cinema seems downright sluggish. Devil May Cry (2001) introduced a semi-fixed camera that was refined by God of War (2005). Stardust (1993) used pre-rendered 3D sprite graphics that were refined by Donkey Kong Country (1994) and perfected by Vectorman (1995). Back in 1980, Dona Bailey was inspired by Space Invaders which created the “shoot ’em up” genre in 1978. Let’s look at her addition to the genre after the jump.
END_OF_DOCUMENT_TOKEN_TO_BE_REPLACED

No, I’m not thinking of the play by Shakespeare, or the painting by Giogiorne, though both were quite good. I’m talking about the arcade game by Atari. Fresh off their success of Asteroids, Atari once again called upon the sexy power of vectors to make their next space-shooty game. In light of Asteroids’ marked success and the countless clones it inspired, just what makes this unassuming twitch game so special? I mean, aside from the awesomely angular cabinet? Let’s take a look. (Seriously, look at that thing. Atari was not messing around when they chiseled those edges and corners!)

END_OF_DOCUMENT_TOKEN_TO_BE_REPLACED

If you were alive during the cold war you must remember the fear and uncertainty that came with wondering how long the arms race between the US and USSR would last. Missile Command was inspired by this very fear and puts you, the player, in charge of millions of lives.

END_OF_DOCUMENT_TOKEN_TO_BE_REPLACED

Original version: Adventure, released in 1979 for the Atari VCS