Original version: Adventure, released in 1979 for the Atari VCS

If you’re approaching Adventure from a “recent” perspective, it is a hard sell. Just as it would be very difficult to appreciate a nickelodeon film from 1910, coming at Adventure without understanding its innovations and precedent would make it seem like a rough draft that was never revised. For deeper understanding of this we will turn to the book Racing the Beam by Ian Bogost and Nick Montfort.

Robinett’s main innovation in Adventure was devising an approach to the graphical representation of a player’s movement through a complex space…. To reduce the amount of memory on the TIA chip, … only three bytes of storage [are devoted] to playfield graphics, of which two and a half are actually used by the display…. exploration in action-adventure games involves… discovering the edges of spaces at least as much as… exploring their interiors. To allow for this…, Robinett had to devise a new way to use playfield graphics to describe a large space.

In non-text games up until this point the player was confined to one screen for the entire game, and if the player traveled off one side, the character would simply loop back onto the opposite side of the screen as in Asteroids or Pac-Man. Adventure, however, was among the first, if not the first, to feature multiple screens the player would move across freely. Since players were used to being confined to one screen, this Adventure seemed huge. Although it can be completed in less than two minutes, the gamer of 1979 would surely have spent much longer exploring its mazes and castles. Add to that encounters with dragons which must be slain, solving the spatial puzzles of the mazes while carrying only one object at a time, and all the while having to remember which way to go, and suddenly one can appreciate this early adventure masterpiece.

Adventure is best-known for its Easter egg, only the second one in the medium. Atari forced a policy of anonymity for its developers. A developer had six months to create a game from scratch, including the art, manual, sounds, and programming. Atari didn’t care what a developer did during this time as long as they had a finished product ready at deadline. When a game shipped, it only credited Atari. No developer was given due credit for the game s/he made in isolation, from the bottom-up. For this reason, Robinett decided to insert his name in secret. Upon completing a specific series of tasks, the player would stumble upon a room with the below message flashing rhythmically.

Because the VCS had no character memory, the above letters were actually sprites, which together take up 5% of the cartridge’s total memory. The secret was well-enough hidden that by the time a fan discovered it, Atari could not recall the cartridges and remove it. And they could not fire Robinett because he had quit by then.

The funny-looking dragon is also fondly remembered, though only because it looks nothing like a dragon. A main page on HomestarRunner.com features the antagonist Strong Bad being chased by the dragon (when the mouse hovers over the “email” button), whom he refers to as a “freaking duck.” Strong Bad once again refers to the dragon this way when playing Adventure as a baby in sbemail 140.

Robinett set out to make a sequel, which eventually resulted in the educational game Rocky’s Boots in 1982. It was a very good game for teaching boolean logic in a warm, non-intimidating way. When looking at the playfield’s square borders and the large square that serves as the player’s cursor, it’s easy to see the resemblance to Adventure. Rocky’s Boots was followed up by the 1984 game Robot Odyssey, which was much more difficult because it revolved around controlling three different robots by programming them to carry out certain commands.

So there you have it. 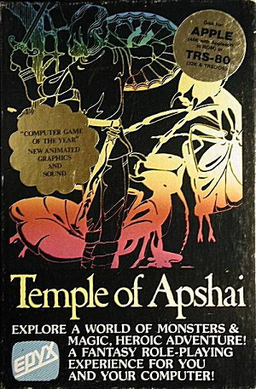 is one of the very first graphical CRPGs (Computer Role-Playing Games), predating even Akalabeth by Richard Garriot of Ultima fame. It was developed by Automated Simuations which would later be known as Epyx. Temple of Apshai was the first RPG with room descriptions–a welcome feature, considering that the game contained over 200 rooms in four dungeons to explore. Unfortunately the game itself did not have enough room to store all that text so it just gave a number. The player would then look up the number in the manual and read the corresponding description.

There is no ending to Temple of Apshai. The player is simply given better weapons and armor to fight stronger monsters. For the sake of replay value there are four different difficulty levels and two game modes–Innkeeper and Dunjonmaster. When the player loses a battle and faints, he may be rescued by an NPC (non-player character ) who keeps a part of his inventory as payment for the rescue.

The game was a phenomenal success, selling 30,000 copies within two years of release (for the PC market, this was huge). The success of Temple of Apshai paved the way for a burgeoning CRPG market.