1978 didn’t have much to offer, honestly. But it was the year my mom graduated high school, so that was nice. 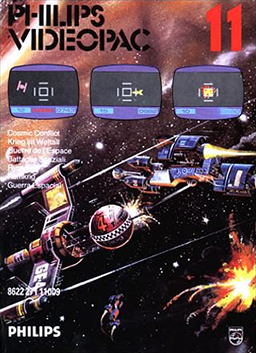 Developers were quite enthusiastic about making 3D games at a time when consoles could barely render two dimensions. Cosmic Conflict was a shooter reminiscent of Nintendo’s Star Fox. You fly around space in a fighter and shoot enemies. One cool thing about this game is that the backgrounds can be surprisingly pretty–the planets in particular are very colorful.

Cosmic Conflict allowed for one or two players and places you in a fighter ship called the Centurion. You take the role of the Centurion’s commander and guard the Earth from an alien invasion (why yes, this game did in fact come out the same year as Space Invaders). There is no ending to the game– you simply strive for a high score based on how many enemies you shoot. Cosmic Combat may have gone on to inspire the Starpath game Phaser Patrol, but considering how obscure it is this is doubtful. Cosmic Combat was fortunate enough to enjoy limited success in Brazil and parts of Europe, but faded out of the spotlight pretty quickly elsewhere. There’s not much more to say, so enjoy a screenshot.

Created by Sega, Frogs was the first electronic arcade game to include a static background, and the first ever game to feature a jumping protagonist. The sprites would be displayed on the static background by being reflected off a mirror at 45 degrees. This meant that the computer had to render the sprites backward so that the player would see them on the background the right way. It appeared that Frogs had really advanced graphics, because the artist could draw an intricately detailed backdrop without worrying about computer resources.

In the game you take control of a frog on a lily-pad and must jump up into the air to catch insects that are flying by. Of course, it’s not enough to just touch them; you have to stick your tongue out and catch them on the sticky tip. Frogs served as the basis for Frogs & Flies on the Atari VCS and Frog’s Bog on the Intellivision which both pit two players against each other to see who can eat more bugs.

Space Invaders was a landmark title that helped to revitalize the gaming industry after the video game crash of 1977.

Space Invaders had the player control a fixed craft which could only move in one dimension and fire up and the invaders from space, or ‘space invaders,’ if you will. This play style came to be known as “shoot-’em-up,” or “shmup” for short, with the “one-dimension”-type game called a “fixed shooter.” Space Invaders was followed by waves of imitators and clones, although many were good on their own merit. Prominent examples include Galaga, Centipede, and later on, titles that branched out into different sub-genres like scrolling shooter (Gradius) and rail shooter (Star Fox).

The gameplay feature that stood out the most was also an accidental quirk. After a certain number of ships was destroyed, the remaining ships increased speed. This was a result of the processor no longer being bogged down by the high number of sprites and instead making the remaining ones move with greater alacrity. Since this had the side effect of increasing the difficulty, the developer didn’t try to fix it. On the contrary, he loved the idea of increasing difficulty, which he first encountered in Atari’s Breakout.

Many a young gamer learned the painful lesson of judging distance, since one had to determine where the ships were going to be in order to hit them with the projectiles. In the meantime, the player has to pay attention to multiple projectiles, be mindful of the shields, and lookout for the sporadically-appearing saucer which could be hit for extra points. The game allows for advanced tactics such as intentionally firing a hole through a shield to fire from relative safety. Shooting the invaders on the rightmost or leftmost column meant that the remaining invaders needed to travel further to get to the edge, delaying their descent.

Space Invaders is notable for many reasons. It was the first to feature a continuous soundtrack (albeit a mere four notes). The tempo of the music sped up as the enemies were eliminated, making the final moments of a round even more tense. It was the first game to record the high score, giving the game even more competitive potential. Indeed, SI was played at the very first video game competition, called “The National Space Invaders Championship,” held by Atari in 1980.

Space Invaders has a legacy that endures today because it, among other things, led Nintendo to enter the video game industry, was the first blockbuster arcade game, established Japan as a serious player in the industry, and has directly or indirectly affected every shooter around today. Not only did its success revive the industry after the video game crash of 1977, it was also the subject of video gaming’s first ever urban legend: supposedly it led to a shortage of ¥100 coins. The game grossed over a Billion dollars in the US and continued to be wildly successful well into the eighties. Not bad for a game, especially considering that “Star Wars,” released a year earlier, grossed $200,000,000 less. Not bad at all.

Also, look at how cute the monsters are. How do you make something cute with so few pixels?