Welcome to Games Appreciation! All are welcome here, especially those of you who don’t play video games or are unfamiliar with them. Before I start talking about Oregon Trail two paragraphs down, I’d like to explain exactly why I’m running this feature. Well, obviously, I love video games. Let’s get that one out of the way. But secondly, I want to share this medium with other people. When someone says “I don’t play video games,” or “I only play flash games online,” my heart sinks a little. There are so many wonderful moments in games that touched me over the years, from the aria in Final Fantasy VI, to the childhood scene in To the Moon. There were many things that haunted me, such as Doug Rattman’s horrible life in Portal, moments that made me cry (the ending of The Walking Dead), moments that made me question why I was doing what I was doing (the entirety of Shadow of the Colossus) and more.

Beyond that, video games offer experiences that no other medium does, by virtue of interactivity. It’s easy to dismiss video games as simple children’s toys, but that assessment is miles away from the truth. If, when you hear the term “video game,” you think of Angry Birds or Farmville, you have the wrong idea. Not all games are meant to be a minute’s worth of meaningless distraction. Video games (when they’re made properly) have a world of benefits to offer you, emotional, physical, or otherwise. Some games are all about reflexes and working toward a goal (Pac-Man) while others are entirely about story and offer little-to-no gameplay (Katawa Shoujou). Other games, like Oregon Trail, have a plot that plays out through gameplay. These games offer truly special stories because no two players will experience them the same way. After Oregon Trail, we’ll be looking at a lot of arcade games that are entirely about gameplay, but not to worry. Variety will be upon you before you know it! And remember, the best is yet to come. Even as I’m writing this in August of 2014, I know that for this medium, the best is yet to come.

So what’s in store for us today? Possibly the most famous educational game of all time. Oregon Trail was originally developed as a teaching tool by a student teacher Don Rawitsch. He was teaching an 8th grade history class while finishing his senior year at Carleton College in Minnesota, and needed to get his students interested in the Oregon Trail. He enlisted the help of two other student teachers to write the program and presented it to his class in December of 1971. Despite a few bugs, it was an instant success. That’s pretty admirable. When was the last time you got 8th graders interested in anything besides the opposite sex? 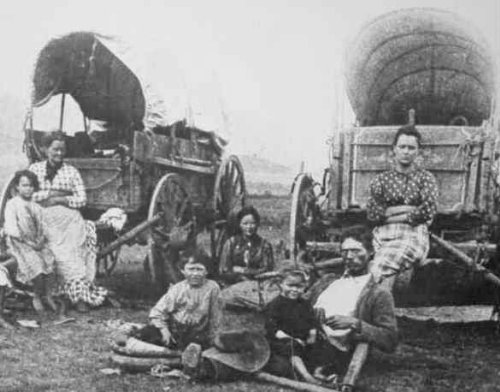 Their faces only know disdain.

In the game you take on the role of the leader of a wagon bound for Oregon. It is your job to reach your destination without dying and losing all your members. The game faithfully depicts many of the perils waiting 19th century travelers. Vittles go bad, rapidly flowing rivers tear apart wagons, and oxen grow ill from exhaustion. It’s easy to read about the dangers of a 1,500 mile journey, but it’s another thing entirely to vicariously suffer these dangers yourself. That’s the sort of enthralling premise that Oregon Trail offered. Perhaps without even realizing it consciously, the player learns about an important part of American history by living it in the safety of his own living room. I wish that MECC would have made games about dozens of other events in history. Imagine playing as Mao Zedong, being relentlessly pursued by Chiang’s forces across China; or Magellan circumnavigating the globe!

Oregon Trail‘s popularity endured through the 70s, 80s, and 90s, with each successive version adding more features and historical tidbits. The Deluxe version, shown below, even has encyclopedic entries for each of the landmarks. (A curious yet lazy player will have no excuse not to learn just because an encyclopedia is out of arm’s reach.) And yes, all the landmarks are indeed accurate. Their presence can (and often does) lend to the gameplay. You see, each landmark is a safe area where your oxen can eat and your party members can heal. And when you have two sick members, an ox with a broken leg, and no grass for the oxen to eat, the slow crawl toward the next landmark can be excruciatingly suspenseful. Events happen based on random chance–just as they would have in real life–but this doesn’t detract from the gameplay at all. If you know what you’re doing, you can weather any circumstances. Including weather. Have a watch below.

(link to video) (mirror if the first one is down)

I chose a pretty easy setting so that I would be certain to get you all the way to Oregon. When you play, though, feel free to challenge yourself. Now, for all the games in this Games Appreciation series, I will not always choose the original version–I will choose what I believe to be the “best” or “definitive” version. If you grew up playing a different one, your nostalgia might not be served, and I’m sorry for that. I actually played the Apple //e version when I was a child, but I chose to go with the DOS version. Today, there are versions on Android, iOS, and Windows phone, but they’re not as good.

Thanks to the efforts of a certain ExoDOS you can play Oregon Trail in your web browser here. If you’d rather play offline and you have a physical copy of the game that you can no longer play, an alternative way to play is with an emulator. An emulator is a computer program that emulates the function of a particular computer or video game console so that you can run it on your PC. The best emulator for DOS is DOSBox, which you can download here. (mirror if the site is down) When using an emulator, you need an electronic copy of your game in order to play it. If you legally own a copy of Oregon Trail for DOS then you can download a backup copy here. (But I won’t tell anyone if you don’t.)